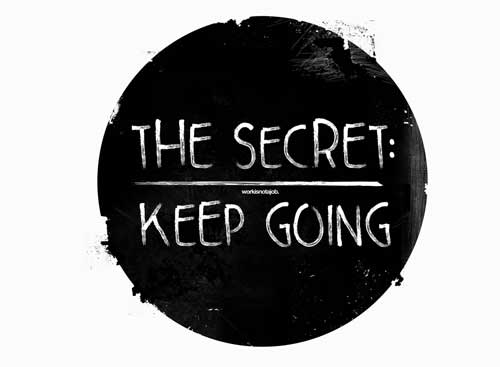 This sentiment is where we're at this week. Don't give up, just keep going.

The Lovely One is being master carpenter on weekends and evenings and I just seem to endlessly paint whenever I have a moment. It's school holidays so there are a whole new set of demands. Keep going, keep going.
0 comments
Labels: renovation

When I was pregnant with Babe 1, one of the first things I made was a big Marimekko Unikko canvas in red and pink to hang on the wall of her new nursery. As we've moved homes it's been the one constant in their bedrooms.

A month or so ago I realised that the fond sentimentality it held for me was not shared by Babe 1 when I found it had been taken off the wall and replaced with yet more Justin Bieber magazine clippings and her new One Direction poster (to go with all the other One Direction posters). It was apparently taking up too much precious wall space.

Which brought me to this week and the need to finalise feature wall colours for their bedrooms (yes, very excited that we're getting close to painting Stage 2!). Given that the rest of the house is all white and grey I felt it was important to let them express themselves in their rooms and if they wanted to have colour, then I wanted to embrace it. So what do you do when it comes to sitting with them and pouring over colour charts (which I admit is overwhelming for an adult let alone a small person) and they both start selecting all the colours for the tops of their lists that I would put at the bottom of mine! I'm talking real crimsons and bright turquoise blues, maybe a candy pink or two thrown in. It was such a quandry. Let them exert independence and individuality whilst also getting my own way?!@!#!

In the end it was a really fun hour or so and I prompted and prodded so that we happily found a middle  ground and I tried to ensure they felt they'd come to the final decision themselves. The colours are of course brighter than I would have liked but they love their choices and it's brought on a whole new level of excitement for them which is so gorgeous to watch.

In short, Babe 1 has chosen a kind of cornflower blue - not quite purple, not quite blue for the wall which we'll match with grey linen curtains, maybe a grey rug and some pinks in the linen (a big change from her original electric turquoise).

Babe 2 had her heart set on stripes so we've found a sunny yellow for the wall to match a multicoloured striped IKEA rug with grey linen curtains (a better solution than the suggested yellow, purple, orange and pink stripes on the wall). 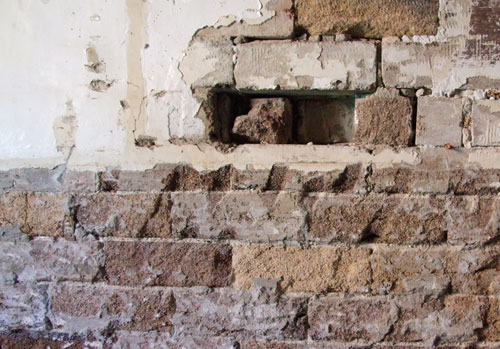 I believe, I believe... but man it's testing every part of me at the moment. The internal walls in the old house look like this photo while we wait for the renderer. We're open to the elements in places again where the windows are being altered. There are huge holes in the floor where the walls were moved and even though the finished section offers some respite... it's rapidly filling up with building materials and fixtures that can't be left in the old house because they'll get trashed. The excitement of last week's wall relocations is fading as we face the hard slog ahead.

I hate to write these posts as it makes me feel ungrateful and frankly it's dull complaining because really we just have to get on with it... but I also feel they're sometimes necessary. I know friends reading this are going through the same thing and it's wrong to think it's always rosy or rewarding or satifying... because sometimes it's just plain miserable. But I believe, I believe... let's hope magic is hiding behind the next ceiling joist.

I’m Clare Young. This blog follows our renovation journey back in 2012, my paintings and some of the moments that bring me inspiration and joy.
My website is at clare young.